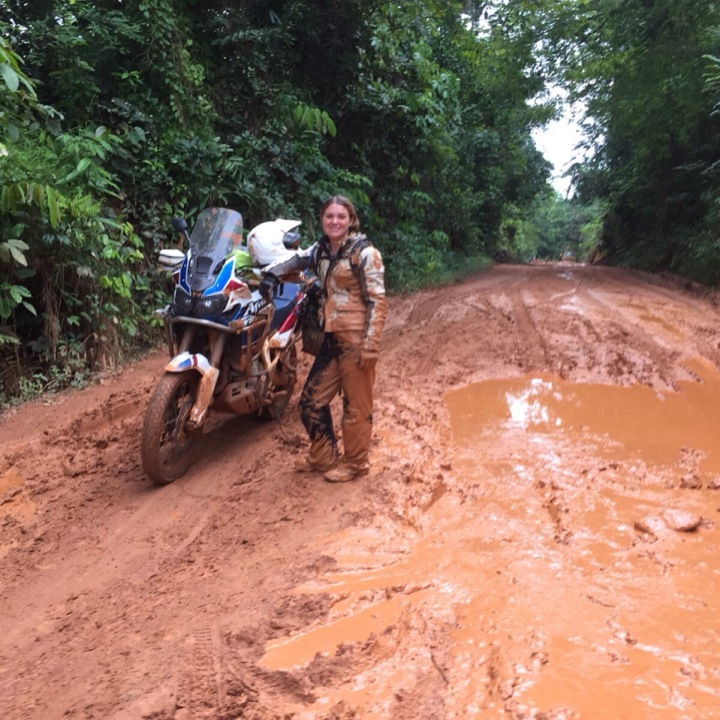 We headed for a border in the far north east of Liberia, which would mean we entered around half way up  Cote D’ivoire, near to the town of Mann. The first part of the drive was an easy tarmac road which took us through tiny one horse towns, I greatly enjoyed the names of local businesses, ‘Fear God Auto Parts’, ‘Where is the Money Business Centre’ ‘Smiling Mother Restaurant’ ‘God Willing Petrol Pump.’ We stopped in Saclepea for lunch and to wait out the rain. Whilst there, we got chatting to a friendly man in his early 50’s who was sat on the restaurant’s porch. The restaurant it turned out, was run by his daughters. He told us that he used to make good money an engineer but that during the Ebola crisis the company he worked for had withdrawn all of it’s operations in Liberia and now he had to depend on his daughters. It was the same all over the country he said, all the international companies left during Ebola and they still have not returned. When he discovered Leon was also an engineer he became very excited, ‘please’ he said ‘tell your company to come to Liberia, there are a lot of minerals here and the people want to work but there are no opportunities.’

From Saclepea, the tarmac was replaced by a steep, undulating dirt track. No sooner had we set off than the rain started again, leading us to take shelter in a tiny stall with around 20 locals. The rain was so strong that within 15 minutes the ground around us had flooded and we were stood in 3 inches of water. By the time we started driving again the track had turned into a muddy river. We were starting to understand Liberia’s reputation for having some of the worst roads in West Africa!Large sections of the road were deep muddy trenches, which the sudden rain had filled with water. We passed a lorry which was buried up to it’s axels in the mud; it didn’t look like it would be moving any time soon. Not long after this we came to a particularly wide muddy trench, Leon tried to go around it, but the wheels slipped and the bike tilted to the side. 2’up and with the amount of weight we are carrying, once we start to go, there is no coming back and the next thing I knew I had been dumped unceremoniously right in the middle of the puddle!

From there the road of anything became worse, enormous cracks down the middle of it meant you had to chose your route very carefully. Once we fell after accidentally driving into the middle of a crack and getting our wheel stuck. Another time we picked the wrong line and ended up almost driving straight into a huge crater. By the late afternoon, we were utterly exhausted and decided to stop for the night. We found ourselves in Baylehglay, a tiny village some 50km from the border. One of my favourite things about Africa is the incredible hospitality; you can turn up in any village and ask for a place to stay, someone will be sent off to find the chief (every village has a chief) and he (it is nearly always a he) will find someone to accommodate you. This was the first time I had actually met a village chief and was surprised when he arrived by how young he was, I would guess around early 50’s and also by the fact that he was wearing ordinary clothes (he had been working in the fields). Evidently on some level I was expecting a wizened old man in a leopard print toga. We politely declined the Chief’s generous offer to let us stay in his house, in favour of camping, but gladly accepted the use of his shower.

By this point in the trip we had become very accustomed to people staring at us, but even by our standards, the level of interest we attracted in Baylehglay was unprecedented!  As we were setting up our tents on a patch of grass outside the Chief’s house a crowd of around 100 people gathered. Until then, most of the interest we had encountered had come from children, but in Baylehglay there seemed to be no upper age limit; young, middle aged and elderly people alike,  came together to stare at these strange new arrivals. It was not like your usual staring, when people would look sheepishly away as soon as they realised they had been caught, this was full on and unabashed, seemingly without any comprehension whatsoever that it could be considered rude. We thought that most would eventually loose interest and move on, but we had obviously underestimated our own intrigue as the crowd stayed to watch in fascination as I inflated my air bed and as Fabian cooked us a meal of sausages and pasta. At first we tried somewhat awkwardly to make conversation (most people were shy and spoke very little English), but after a while we realised that they were happy just to stare at us and so we carried on, trying and apparently failing at not doing anything wildly interesting. As we sat down to eat, the crowd formed a tight circle around us, jostling for the best positions. One lady had obviously become tired from all the standing and so was leaning casually on the back of Leon’s chair. Eventually we told one of the older kids we were tired and asked if he could perhaps send the others away, he started shouting order and for a moment it looked like the people would obey; the circle broke apart and there was a sudden rush of cool night air which was strong enough to blow out the candle on our table. It wasn’t long however before people began sneaking back to their previous formation.

Eventually one of the elders ordered everyone to bed and we were left in (relative) piece. The following morning however our fan club was back. We noticed a lot uniformed children amongst them, ‘shouldn’t they be in school?’ I asked. ‘Yes’ replied one of the older kids, ‘but they are all refusing to go because they want to look at the white people instead.’ Deciding we had probably caused enough disruption to village life for one day, we bid our farewells. It was crazy to think that in this day and age a person’s skin colour could be the cause of such fascination but then again,  it was probably the first time most of the villagers had seen a white person up close and it was definitely the first time they had seen us cook sausages.

Liberia’s roads had evidently taken their toll as the night before Leon had noticed a dark patch on the front wheel; it appeared that we had blown a fork seal and were leaking oil. We decided that until we knew how bad it was, we should try and alleviate some of the weight on the bike and so the following day I road with Jim. Overnight the road had dried out a lot, it was still tough, steep and rocky, with huge trenches, but at least we made it to the border. Little did we know that (for the others at least) this was only the start of their ordeal!

One thought on “Adventures en route to the border”

1 month with this little guy ⁣
❤️ My kind of Valentines ❤️ ⁣
"No winter lasts forever; no spring skips its turn."⁣
Merry Xmas everyone! Not quite the day we had planned, but we have beautiful weather and views and homemade mince pies so it’s not all bad. Wishing you all a fun and relaxing day and a happy and healthy 2021 x
Perfect way to spend a Sunday...⁣
Sharing a few of my favourite border stories @overlandevent what a great weekend!
Splashing out in Gabon⁣...
Our first few days in Africa, back when we were still clean and shiny and new. ⁣
Loading Comments...
Comment
×
%d bloggers like this: