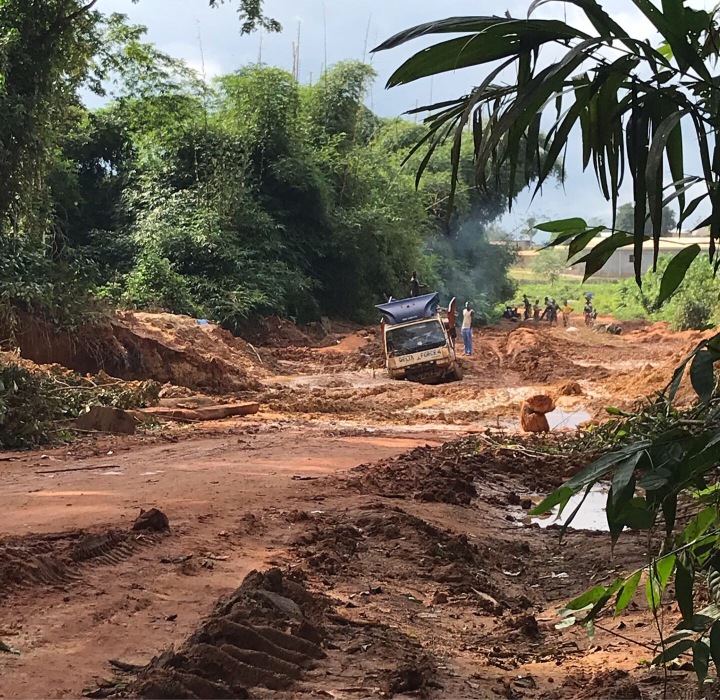 From Man we headed South to Park Taï, one of the last remaining areas of primary rainforest in West Africa and home to forest elephants, pygmy hippos and chimpanzees. The chimps in Park Taï chimps are unique, they hunt through teamwork, use more than 26 tools and are particularly famous for their nutcracking  skills. Half of the fun was in getting to the park. From Man it was around 270 km, the majority of it down an incredibly bumpy, muddy and potholed track.

The foreign office advises all travel to the region around Park Tai due to the risk of bandits. As a precaution, before setting off we agreed that we would travel together and wouldn’t travel at night. Of course what actually happened was we got separated from the others (who took a wrong turn, got stuck in the mud and had to be dug out by the locals) and arrived at the park alone and in the pitch black! Fortunately there were no bandits to be seen (most people we spoke to were pretty bemused by the travel advice).

The following day the guys arrived at the park headquarters, together we organised a guide and trekked the 7km to the forest camp. The rainforest was extremely dense and the path dilapidated, in places we had to wade through small streams. The next morning we awoke at dawn and set off in search of the Chimpanzees. Around 6am we reached a clearing where the guides told us they had spotted them the previous day, we saw signs of their presence, droppings and half eaten fruit, but the chimps had moved on. The guides told us that it had rained the night before and the chimps did not like walking on the wet forest floor, so they would likely be high up in the trees trying to catch some rays (I could relate). For around 20 minutes our guides listened intently to the sounds of the forest, suddenly and in response to a noise apparently only they could hear, they jumped up and motioned for us to follow, setting off purposefully at an almost run. For almost 20 minutes we ran through the forest, but there were no further signs and it seemed the trail had gone cold.

The next two hours passed in much the same way, just when we would start to think it was hopeless our guides would hear something, we would charge off, sure that any minute now we would see the chimps, but then somehow we would loose them again. Sometimes our guides would stop to communicate with another team of researchers who were also looking for the chimps, they would thump on the trunks of the tallest trees, causing a loud boom to reverberate around the jungle. Sometimes they would mimic the noises of the chimps, but all to no avail until, all of sudden it was, and we were being led to the foot of a large fruit tree and there in the branches were the chimps! It was a truly amazing experience. The morning’s efforts emphasised that these are wild animals and finding them is far from guaranteed.

Chimpanzees share 96% of our DNA and so can catch diseases from humans very easily, which is why we all had to wear these very stylish masks.

For the most part the chimps lounged in the tree, occasionally reaching over to grasp a branch with one massive hand, whilst the dexterous fingers of their other hand picked it clean of fruit. They sat with their backs to us in a way I couldn’t help but think was deliberate, especially as every now and again one would shoot a disdainful look over it’s shoulder as if to say ‘are those idiots still here?’ No one do anything interesting and perhaps they’ll get bored.’ Their laid back brunch was only interrupted by the arrival of some other members of the group. At this the chimps in the trees began a kind of frenzied screeching, flailing their long arms and shaking the branches of the trees.

From Park Tai we headed to Yamoussoukro, the unlikely capital of Côte d’Ivoire. I found it a strange city, full of wide, tree lined and almost deserted boulevards, in complete contrast to the chaotic, traffic-logged and overcrowded cities I had come to associate with West Africa. Perhaps the strangest thing about Yamoussoukro is it’s church, Our Lady of Peace Basillica, which with an area of 30,000 square meters and height of 158 meters is the largest in the world. I found the church to be a curious mix of the ridiculous and the grotesque and also slightly sad.

Ridiculous because its a gigantic replica of St Peter’s Basillica in the Vatican plonked down in the middle of a palm plantation in West Africa, where less than 10% of the population are Catholic. Grotesque because in a country where 46.3% of the population live below the poverty line, it cost an estimated $175 – $600 to build (I am not religious, but if there is a God and he thought that was a good use of public funds, then I can’t see he is someone worth worshiping). And sad because despite all the money and effort, nobody really cares. The church can accommodate 18,000 worshippers (300,000 if you include the plaza) and yet even Sunday services are rarely attended by more than a few hundred people. Most of the visitors are tourists who, like me, have come to laugh at this incongruous and overblown monstrosity. I ended up feeling a little bit sorry for the old president Houphuet-Boigny who ordered it’s construction as his personal gift to the Church. The cornerstone was laid on 10 August 1985, but he would had to wait a further  5 years (during which time the church remained closed) for Pope Jean Paul II to visit and dedicate it. To date this has been the Pope’s only visit to the country, although a 40 room papal residence complete with swimming pool is maintained all year round at a cost of an estimated cost of $150 million annually just in case! It reminded me of a rich kid who gets an expensive new toy, but still can’t make any friends.

From Yamoussoukro we headed to Abidjan, a buzzing metropolis and Côte d’Ivoire’s capital in all but name. Between 6 of us we hired a 2 bedroom airbnb, what it lacked in space it more than made up for by having an oven (I defy anyone who has spent as long as we have without an oven not to get extremely excited at the prospect of baking a pie).

Our last stop in Côte d’Ivoire was the Elephant’s Nests in Grand Bassam, something of a Mecca for Overlanders. Despite the hostel not yet being open, the front yard was full of trucks by the time we arrived. The hostel is run by Chloe, a fountain of useful knowledge and inimitable Irish lady, who has lived in West Africa for over 15 years and moderates the WestAfricaTravellers Facebook group. She was kind enough to let us turn her garden into a makeshift garage, as we attended to some long overdue maintenance issues. The route to Park Tai had finished off what Liberia’s roads started, meaning we needed to replace the fork seals. Fortunately a friend of ours went back to Estonia for a few weeks and brought us out replacement parts (they would have been impossible to source even in Abidjan). We ended up staying much longer than planned at the Elephant’s Nests as it was Leon’s turn to get Malaria. He had actually come down with it 2 weeks before on our way back from Park Tai (Malaria is cyclical). He wasn’t running a fever (it was most likely being suppressed by paracetamol) and at the time I had foolishly dismissed his symptoms as Man Flu (something I will no doubt be reminded of for years to come). The second time around it was much worse – a valuable lesson to always get a malaria test – but after 3 days of injections in the bum, he was pretty much back to health.

The Elephant’s Nests was also the final stop for Blanco. After 3 months, 5 countries and more adventures that most human’s have in their lifetimes, the time had come to say goodbye. Jim was about to drive to Mali to try and sell the Subaru and although we spent many hours thinking up creative ways to carry him on the bike (kitten sized driving goggles featured heavily in the designs), we knew this would not be what was best for him. Now that he was getting older, he needed his own territory and space to roam and he had this in the Elephant’s nest, as well as two dogs he could enjoy terrorising. Saying goodbye was incredibly hard, we will miss this road trippin, jungle loving, tent destroying, lizard killing legend of a kitten a hell of a lot, but know that we have found him a great home, where he will be stealing the hearts (and into the cars) of overlanders for years to come. Bonne route little man!!